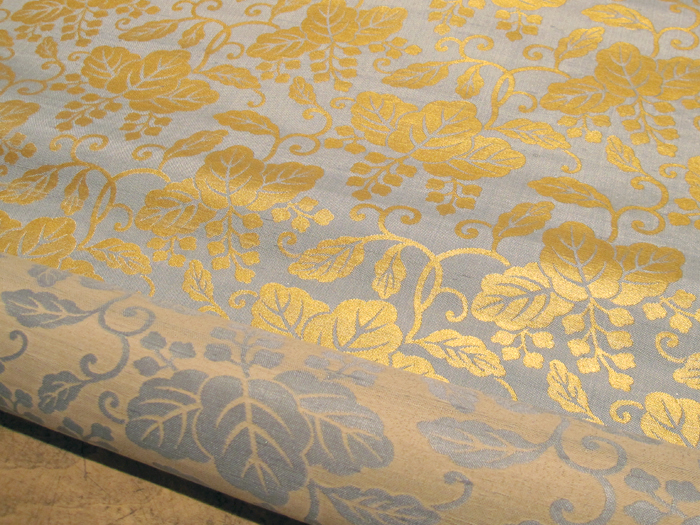 In Japanese, different Kanji characters are often pronounced the same, but have different meanings.If you look up ‘Kire’ in the dictionary, it is written as

, which nicely expresses the way in which the fabric is cut to make picture mounts (not the Kanji

for rip). However, it is generally more common to use the Kanji

(rip) to relate to the fabrics used in picture mounts.

About ‘Meibutsu-Gire’ (The Specialty Fabric) 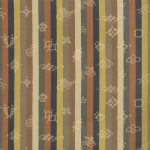 The ‘Specialty Fabric’ (Meibutsu-Gire) is originally from China, which is used to wrap specialty tea caddies ‘Chaire’ at tea ceremonies. The three types of ‘Kireji’ fabrics; ‘Kinran’, ‘Ginran’ and ‘Donsu’, were imported from China in the Muromachi Era, of the Ashikaga Yoshimitsu and Yoshimasa Period (14th Century). These fabrics were owned by tea ceremony performers, high priests, upper-class samurais and various other collectors. The best fabrics amongst them were coupled with tea ceremonies and later became the so-called Specialty Fabric. These fabrics are principally named after shrines and temples, famous priests, feudal lords and tea ceremony performers or from scenes of ‘Noh’ performance where the fabrics were used for costumes. For example, the ‘Kinran’ fabric called ‘Futari-Shizuka’ is thought to be named after the dance performance given by the General Ashikaga Yoshimasa.

In Japan, we call the materials that have gold thread patterns on Aya-ori or Byoushi-ori base fabrics ‘Kinran’. We also have ‘Ginran’, which has silver thread woven into it, fabric decorated with gold leaf ‘Inkin’, and ‘Kinsha’ with silk interwoven with gilt thread.
We can find a phrase in the Exodus of the Old Testament, ‘Spread gold to make thread, and weave that together with purple or hemp threads.’ Therefore, we can guess that the use of ‘Kinsha’ dates back to over 2000 years ago in Western Asia where gilt threads were twisted into fabrics. Later years, ‘Hakushi’ was developed in China, which is made by sticking gold on paper and placing it on fabrics.
For picture mounts, ‘Kinran’ is a high-end fabric and the appropriate material is chosen according to the content and the purpose of the picture.

This is a type of ‘Byoushi-ori’ and it is a thin fabric that has a beautiful shine to it. The patterns are clear, since the thread that makes these patterns are woven with a different composition from the base thread. It has a unique texture and an unobtrusive pattern, which makes it an important fabric for picture mounts.